As of May 9, 2018, the Ministry has released a new and improved version of their Prescribed Proxy Form. The updated proxy form addresses many of the concerns the condo industry had voiced after the amended Act came into force last November. The updated proxy form has resolved some of the issues that we had raised - making it easier for owners to complete and addressing some of the concerns about proxy holder discretionary voting.

GetQuorum’s electronic proxy system is fully compliant with the updates to the Prescribed Proxy and has already been rolled out.

Aside from a general reorganization of the form (ie. restructuring of certain sections and making the language clearer) the most substantial changes to the proxy form are as follows: 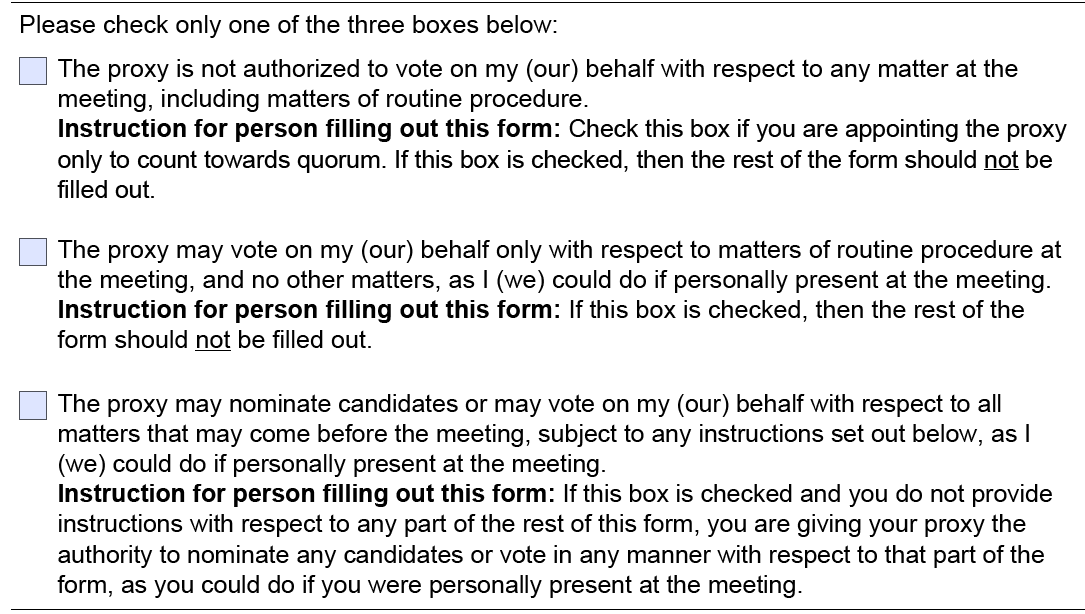 This addresses some of the concerns we blogged about not too long ago regarding the proxy being ambiguous when it comes to discretionary proxy voting.

The rest of the form is substantially the same, just with sections moved around or hidden unless needed. This makes for a shorter and cleaner form in most cases. The changes are a welcome improvement, for the most part. As previously mentioned the updated proxy form now solves some parts of the discretionary voting debate, but raises another dilemma.

There's no clear option for an owner to refuse to vote on a matter.

As we mentioned in one of our other blog posts, voters have a legal right to abstain or refuse to cast a vote. Look at the following section from the proxy form in which an owner can elect directors. How would you fill it out if you decide you don’t want a vote to be cast on this matter? 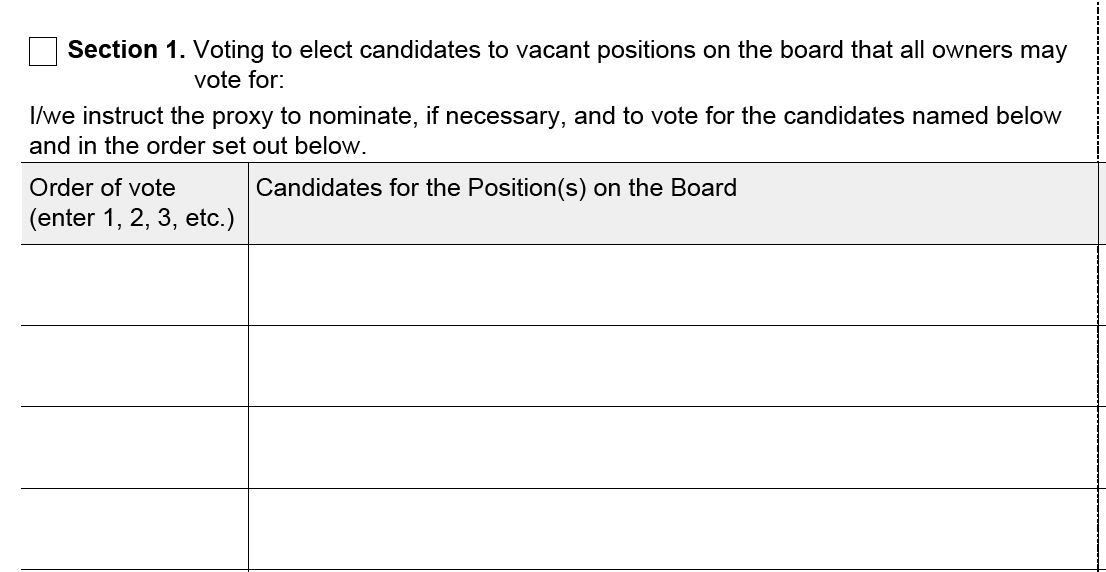 Remember that these forms are meant to be used by the general public, which includes people that may not have the experience to fully appreciate the nuances of completing these types of forms correctly.

In exchange for a free coffee we asked a sample of twenty people at our co-working space how they’d "abstain" from voting using the updated proxy forms.

All of the responses seem like reasonable interpretations at first glance, unfortunately the new language in the proxy form now states:

Our experiment reveals a real problem - specifically that the form still leaves room for misinterpretation of the proxy form if the owner has not filled the section out explicitly. If changes to the Act were meant to protect condo owners, then the forms provided to owners should contain clear instructions so that there is no room for confusion.

What is GetQuorum doing to help?

We are big proponents of consumer protection and believe that the proxy form should capture the intent of the owner when voting. Here's how GetQuorum's electronic proxy system handles the updated requirements: 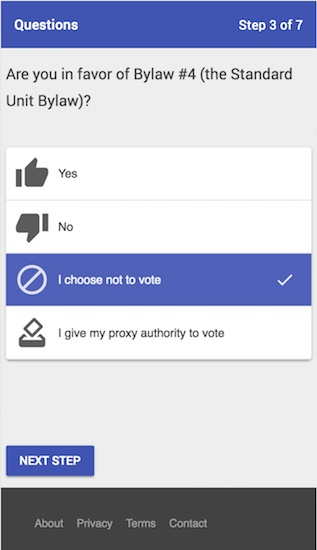 Voting on a by-law using GetQuorum

In the case of an owner choosing not to cast their vote in the matters of electing directors, GetQuorum outputs a proxy form like this:

The owner’s intent is perfectly clear, there’s no ambiguity here

Where do we go now?

The Prescribed Proxy form was meant to be a catch-all for every possible permutation of a condo meeting. But, in the attempt to be all things to every meeting type the Ministry had made an overly long and complicated form. Though the updates to the form now addresses some of the issues that had been raised in the condo community, it’s still an imperfect instrument that still allows for misinterpretation of an owner’s voting intentions. Proxy form disputes can be a common occurrence when filled out by hand because of the ambiguity involved when filled out incorrectly.

Fortunately with a guided system like GetQuorum around, owners fill out their proxy perfectly each time. This gives our clients comfort in never having to worry about their owners' proxies and other irregularities.

Are electronic proxies the only way for owners to vote online?

No, in the Amended Act the Ministry now enables condos to permit their owners to vote through “telephonic or electronic means”. These additional ways to vote were part of the number of “mini bylaws” that the Ministry added to the Act to make it easier for corporations to enact more ways for their owners to participate in decision-making processes. These “mini bylaws” can be passed with only a majority vote at a meeting - essentially over 12.5% of owners need to vote “Yes”.

Need more guidance on passing the electronic balloting mini bylaw? Want to see a demo of our ballot voting in action? Reach out to us.

Splash photo by rawpixel.com on Unsplash

The amendments to the Condominium Act (the Act) have material changes to the way condo owners cast their votes at owner meetings. First, there has been a wholesale change in 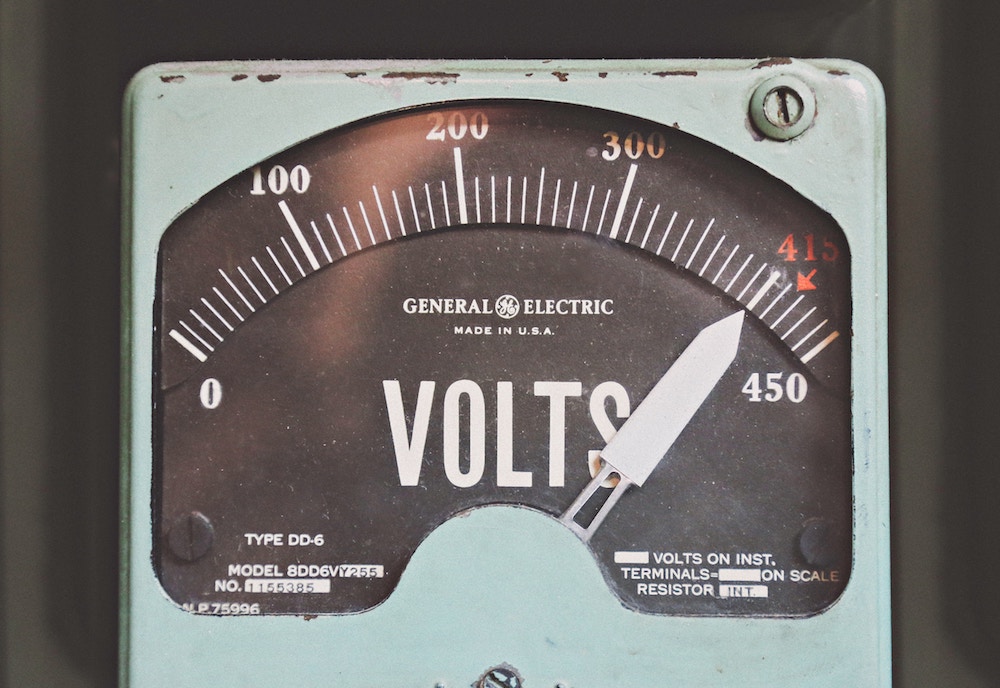 Heads up! The Ontario Ministry of Consumer Services just updated a few of the Condo Act Prescribed Forms as of May 1st, 2018. If you've got an Owner's meeting that