Our Client is a 200-unit downtown Toronto residential condo corporation that has traditionally had issues reaching quorum at their AGMs. Using the Quorum platform, they were able to significantly increase the number of proxies submitted year-over-year and successfully reached quorum days in advance of their AGM.

As per the Ontario Condominium Act, every condo needs to hold an annual general meeting (AGM) of owners. The meeting is used to conduct business that requires owners to vote, such as the election new directors or on the amendment of by-laws. It's similar in nature to the AGM's held by publicly traded for-profit corporations.

These meetings require "quorum", a minimum number of members to be represented, in order to be considered valid. In condo terms, members are the owners of the units, and quorum is (at minimum) 25% of the total units in the condo. Unit owners can either attend the meeting in person or be represented "by proxy", which is a third party given the power to represent the owner through a legal form. A Proxy is obligated to vote according to the owner's wishes.

Many condos struggle to reach quorum

Why is that? Well, it's complicated.

But there's often a combination of there being a significant effort and/or substantial inconvenience for owners to attend a meeting or submit a proxy form. Or, do anything for that matter. The condo industry has a term for this...

We can't blame owners though, life is too busy to worry about boring meetings and legal forms. But the consequences of failing to reach quorum are not good...

So what if quorum's not reached?

The meeting must be adjourned and rescheduled for a later date. Having to adjourn and reschedule an in-progress meeting is a huge waste of time and money. This is especially true for condos that lack the facilities to hold meetings on site. There are also costs related to the AGM informational package (printing and postage), auditor attendance, minute takers, and more -- all of which have to be done again for the rescheduled meeting.

In our client's case, it's upwards of $2500 in hard costs per meeting.

The challenge for corporations is that they won't know if quorum will be reached until the meeting commences. There's no way to plan for failure...

How do condos typically deal with this problem?

Condos usually provide a templated proxy form to owners who are encouraged to fill it out and submit it to the management office prior to the meeting. But getting owners to complete the required action is easier said than done. Owners need to review the AGM informational package, fill out the proxy form, then drop it off at the management office - this is a substantial inconvenience.

So the condo directors and property management team resorts to solicitation and door-to-door canvasing to collect proxies.

"Canvasing after a full day of work, ain't nobody got time for that!"

A common reaction for volunteer condo directors who lack the time (or inclination) to canvas. Heck, I definitely wouldn't want to spend the few precious hours I have in the evenings knocking on my neighbours' doors. I'm pretty sure the owners don't want their evenings to be disturbed by solicitors either.

Our client was facing this issue and figured there had to be a better way. That's where the Quorum platform comes in...

Our mission was simple - help our client achieve quorum through proxies by... 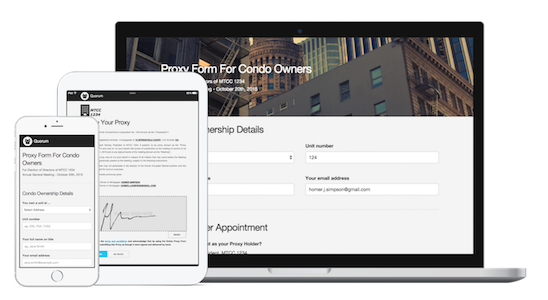 We provide a simple-to-use, secure, and Condo Act compliant electronic proxy form that registered owners can fill out online. Copies of the proxy are sent to the Corporation immediately and to the unit owner for their records. The proxies are printed and registered by the Property Manager ahead of the meeting.

It took owners 2 minutes on average to fill out a form, which they could do from the comfort of their device's web browser.

To get the word out, an initial email was sent with a link to the electronic proxy, then automatic recurring emails would remind owners to fill out the form. Only owners that haven’t yet filled out the form would receive the reminders.

Giving owners a reason to care

Ease and convenience matters not unless owners care enough to take action. We give them a reason to care about achieving quorum because our reminder emails educate owners on why it matters: that failing to reach quorum has a monetary cost to them. 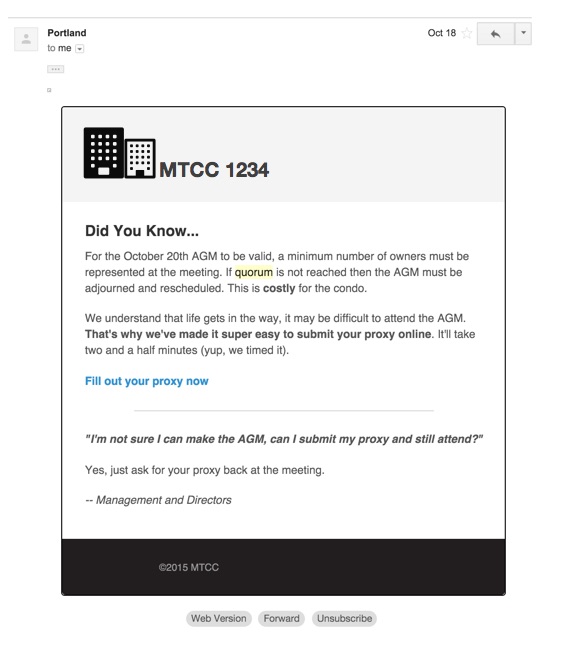 Holding a meeing is expensive. But having to hold the same meeting multiple times? Now that's just plain wasteful.

The Results Of Our AGM Campaign?

Below are the AGM attendance numbers for our client from the last two years. Quorum is 50 units.

Proxies in 2015 almost doubled those from 2014 -- they accounted for approximately 29% of owners represented at this year's AGM -- enough to achieve quorum on proxies alone. And because the forms are automatically sent to the Corporation, we knew quorum was reached days before the AGM.

The results speak for themselves, owners definitely took to the online proxies.

Contrast this to the 2014 numbers, attendance numbers would not have been known until the meeting started. Condo directors and managers often have anxiety at the thought of having to adjourn a meeting. With the new proxy tool that fear was gone.

While the overall numbers in 2015 may not look that impressive, it’s important to note that we launched the online proxy tool only 7 days before the AGM. Indeed, this was quite a last minute endeavor. I’m confident our numbers would be higher had we launched the tool earlier. 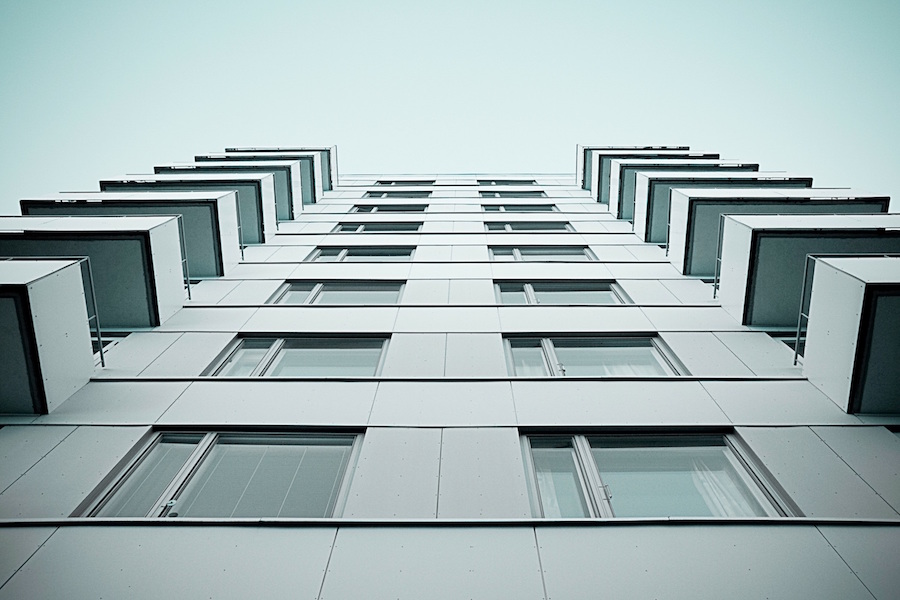 We teamed up with Malvern Condominium Property Management to help one of their clients, a 290-unit condo in Toronto, pass a critical Borrowing Bylaw at a Special General Meeting. This